There are two possible meanings of the name Waggrakine. It is an Aboriginal word either meaning “place of snakes” or “a place of shelter”. Snakes are a regular feature of the school and a staff member is trained to regularly remove snakes from the school grounds and classes in the summer months. No one has ever been bitten.

The first school at Waggrakine opened in 1934 with 7 students. It was classified as an “assisted school” because there were not enough students for an official school. It was located at the corner of Chapman Valley Road and Carnalea Road using a building which was moved from a neighbouring property.

The school consisted of one room approximately 7m by 5m with a verandah on the south side.   One end was enclosed to make a small cloakroom.   There were two doors opposite each other in the south and north sides and two windows, one facing north and the other west.   There was a small rainwater tank on the north east corner and a stone fireplace on the eastern wall.

The school was closed in 1939 and the children travelled by bus to Geraldton. Six gum trees planted on the school boundary and the crumbling remains of the stone fireplace mark the site of the first Waggrakine School. 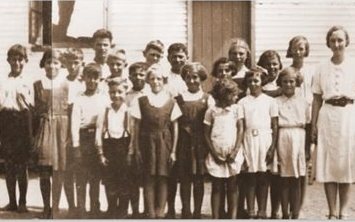 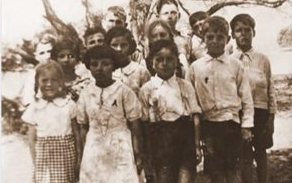 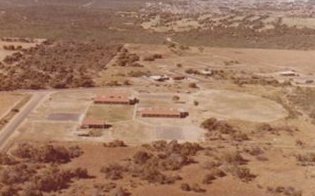 The school opened on the present site in 1979 with 8 primary classes and a pre-primary. By 1993 the school had grown to 14 primary classes, with many students being taught in transportable classrooms. In 1994, a $1.8 million building programme was undertaken to provide additional classrooms and to upgrade the administration building. From 2008 to 2018 Waggrakine Primary School grew one classroom a year, taking us up to 24 classrooms in 2018. As well as 24 classrooms, the school has a modern up to date library, and purpose built Visual Arts and Music rooms.

The school crest was designed by the late Mr Ron Bradfield. The words around the crest were shaped like a boomerang acknowledging the Aboriginal derivation of the word. The shield had two parts.The top two squares represented academic achievement and the bottom half represented brotherhood, with the larger child helping or protecting the younger. In the rear are the Moresby Ranges which are a backdrop to the school.

In 2010 the Building Education Revolution federally funded program saw the early childhood transportable removed and a new Early Childhood Centre consisting of three classrooms being built. Additional extensions, store rooms and verandahs were also added with the BER funds in 2010. This was a great opportunity for the school that we would never have been able to accomplish without the BER funds.

In 1979 staff and foundation year students put together a time capsule which was to be buried for 50 years. However in 2004 a small group, concerned that another capsule had water damage, dug up the capsule. In late 2010 a group of foundation year students whose work was in the time capsule sought to find all the remnants of the capsule and put it back in the ground. This work is now complete and we once again have the capsule underground ready for the much awaited ceremony in 2029. 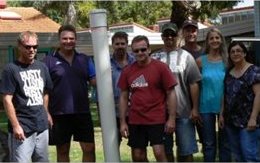 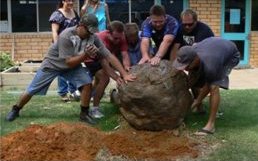 In 2012 and 2013 the school continued to grow. At the beginning of 2013 we started the school year two classrooms short due to increased student numbers. In mid February a break-in and arson attack saw the loss of the school’s entire administration building.

The fire caused extensive loss and damage to the school, and while classes continued in the following days, the school had a huge workload to retrieve student data and rebuild our resources. The school operated out of the library for 21 months until a beautiful, new admin block was completed in October 2014. In 2014 our last Year 7 students graduated from Waggrakine and all WA government primary schools. In 2015 we became a Kindy to Year 6 school, with Year 6s now taking on the role as our senior students.

In 2018 the school board and staff agreed to refresh our brand and reimage the school logo and signage. At the same time the Positive Behaviour Support program was designing new signage around the school. The new logo, uniforms and PBS images brought about new directions and many bright new murals around the school. Brand colours are symbolic and also derived from the natural environment of Geraldton.

• Green is fresh and vibrant and represents nature and the Moresby Ranges. It symbolises growth and learning.

• Deep green represents the trees and symbolises depth of knowledge.

The friendly energy of the brand icon encapsulates the schools vision of a caring and nurturing community and references elements of the local environment. In essence the icon shows the local environment with the blue ocean at the base, and the green hills at the top (symbolising Moresby Ranges). Nestled between the hills and the coast the dark green symbolises the school community. Together these shapes form an iconic heart shape which implies that students are nurtured within a caring environment. Growing from within this environment is a symbolic Tree of Knowledge with its roots stretching throughout the community drawing in students to begin their quest for personal growth. One root runs further down to the ocean to symbolise the depth of knowledge and interconnection to the world beyond. The roots draw the eye upwards representing a student’s growth through the school, achieving and striving, upwards and outwards. The three coloured leaves symbolise the diversity of the students, how they flourish and fly outwards and onwards ready for life’s challenges. With the new logo and image has come the change of uniform. The old uniform was the camel/pebble colour polo shirt with royal blue shorts or skorts.  The shirts had the original crest on them.

The new uniforms, introduced in 2019, were designed by a uniform committee in collaboration with the P&C and endorsed by the School Board. The P&C have worked especially hard to be on board with the change-over ready for the 2019 school year. Students can wear either the old uniform or the new uniform, there is no requirement for students to change uniforms until their parents are ready for an upgrade.